Note that this article contains a discussion on functioning labels, medical bias against autistics, and similar topics in the autism community.

Since writing this post, my support needs have changed considerably due to traumatic brain injuries and other conditions. Since being a full-time AAC user, I’ve found the exact opposite to be true. People no longer assume I’m “high functioning,” but treat me as incompetent or ignore that I’m in the room. The post still rings as true as it did when it was first written.

One of the most common questions I get when I mention being autistic is “So, you’re really high functioning?”

As I’ve mentioned before, functioning labels aren’t really my thing – or most of the autistic community’s either. There’s been a shift from functioning to support levels, or simply just saying what the needs are for each individual person (my personal preference).
I personally think functioning labels are rather harmful – not only for autistic people, but their families too.

When you’re too ‘high functioning,’ you’re denied supports you desperately need simply because you’re not “bad enough” in people’s eyes. And when that happens, we are at risk of becoming the statistics: mental illness, homelessness, lower life expectancy. You’re denied a voice in the autism community because ‘you’re nothing like my child’ – although there will always be a difference between a five year old child and a young adult.

When you’re too ‘low functioning,’ you’re denied the autonomy that you so rightly deserve. The assumption lies that you are unable to experience life – no love, no voice, and that you’re a burden. We get spoken over and ignored on a regular basis. You’re denied a voice in the community because “you don’t know what’s best for you” and to not “bite the hand that feeds you.” Calling someone “low functioning” is cruel and dehumanizing, and expectations for their quality of life are set low.

Autistic people deserve better than this, no matter where they are on the spectrum.

For families, the harm lies there too. These functioning labels hurt everyone, not just the people on the spectrum.

If your kid is “high functioning,” it’s a ‘discipline issue’ or a ‘your kid isn’t really autistic’ – to the quiet yet outright denial of services such as IEPs and behavioral intervention plans in schools. You read in horror of how your child could become one of those statistics from above, and you are judged because your kid “seemed fine yesterday.”

When your child is considered ‘low functioning,’ you’re painted a horrible picture of their future. You’re (wrongly) told that your lives are over, and that they’ll end up institutionalized. Your child will be less likely to receive life-saving medical care such as organ transplants – all because their quality of life is seen as less.

Let me describe to you two separate scenarios of how autism can present itself:

Now, it’s pretty to simple to see which person is considered high or low functioning, right?

In case you hadn’t picked it up: both of them are actually me.

I’ve had several digs made at me by people saying I was too “high functioning,” and that people who are “low functioning” wouldn’t agree with the concept of neurodiversity. (Fun fact: yes, they do. My friends are in the same community, thanks.)

I’ve had people tell me that my autism is obviously not a disability, because it doesn’t significantly impact my life – or that I was given the wrong diagnosis. (As if I don’t have a caregiver?)

Considering I was in neuropsychological testing for several hours, I think the doctor’s evaluation might have a little more weight compared to the person I’d met about five minutes ago.

I may look like I know what I’m doing, but almost 9 times out of 10, I’m doing what we call “masking.” If I was able to freely be myself, I’d be much more outward with my autistic behaviors. I was trained from a young age what was considered appropriate vs “too weird.” As a result of not being able to exhibit these behaviors, my mental health deteriorated. I threw myself into my academics and special interests instead, but at a high price.

By the time I hit high school, burnout was a huge worry for me.

Burnout is what happens when we autistics “mask” our traits and try to blend in with neurotypical people. When this happens, it can have disastrous effects. It can even  manifest itself in depressive episodes or mental breakdowns. For me, I feel incredibly run down and my depression becomes severe. My brain will hyperfixate on suicidal thoughts, and it’s not a state of mind that anyone should linger in. Add in the chronic pain/illnesses, the past trauma, and the hectic environment of college life – it’s easy to see why this is a problem. Sometimes I’m out of commission for a few days due to this mixture, because I know I can’t overextend myself or I can’t function at all. Over time and ~15 years of intensive therapy, I’m beginning to slowly build up coping skills and how to demonstrate more resilience.

People don’t realize just how much energy it takes for me to not curl up away from all the noise and people in public. Sometimes it’s too much, and I still break down crying. I had to learn how to play my part in this impromptu play-piece that everyone else appears to have memorized the script for. Because I learned how to be the human equivalent of a chameleon, I have the ability to “fake it” until I can get out of the situation.

When you have to grow up quickly, you learn ways to simply survive your current situation – and suffer the repercussions later.  It is exhausting to go through the motions, as if mentally checking off a list for each interaction:

All of this rushes through my head with nearly every interaction, and it can be difficult. It’s hard to make sense of anything, and my mind seems to have forgotten how to do anything.

All of this to say: yes, some of us need more support than others. It’s a spectrum for a reason, and we all experience our autistic nature differently. We’re diverse, and we are all part of a great web of neurodiverse society.

Even so, referring to us as “functioning” degrades us as if we were machines – not human beings with our own emotions, thoughts, and ways of processing the world. It hurts not only us, but those around us, too. We need acceptance, support, and understanding. It’s not a race to see whose kid has it worse or which “Aspie” is more likely to be a savant. Functioning labels make this worse.

Based on that, I’d easily label the concept of functioning labels as harmful.

Each of us has our own unique struggles, strengths, and abilities. All of us on the spectrum have value and can make a positive impact in their world. Even the smallest act of kindness creates ripples and waves, and perhaps just the fight to exist and thrive in our society is revolutionary in itself.

I’m autistic. No more, and no less.

If you want to read more on functioning labels, here are some good resources:

9 thoughts on “A Label on Functionality Labels”

An autistic adult’s perspective on navigating chronic illness, life, and the autism spectrum itself. 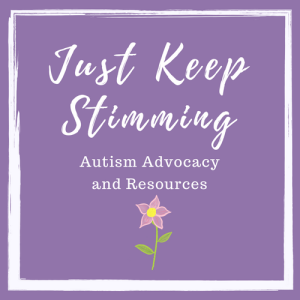 [Photo description: A purple square with a white border. The inside says “Just Keep Stimming; Autism Advocacy and Resources.” There is a hand-drawn flower at the bottom.]